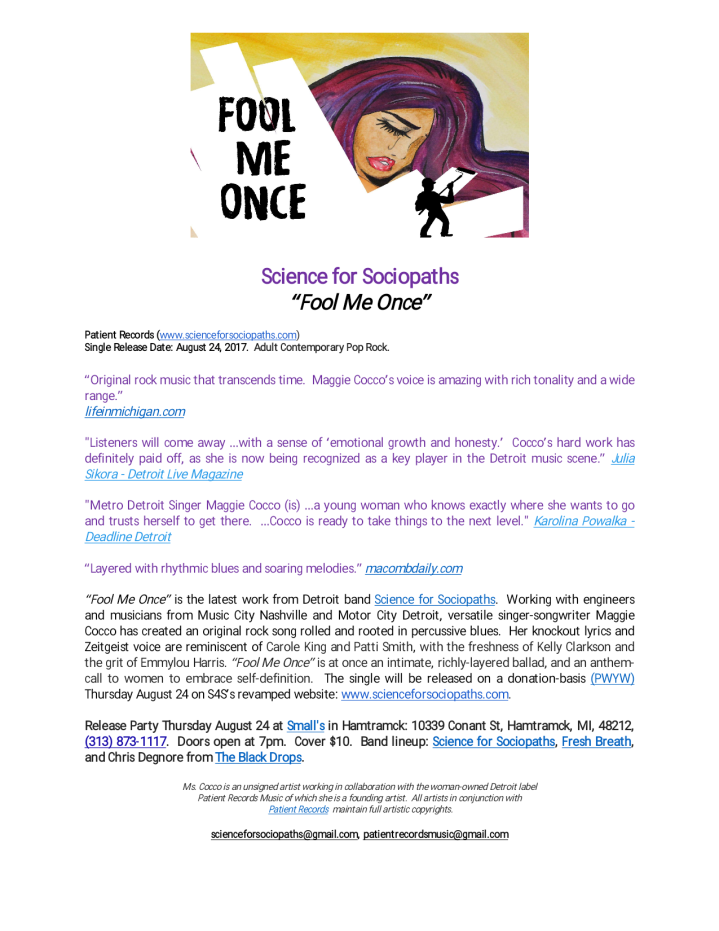 Patient Records Music is a woman-owned record company in Metro Detroit.  The founding artists are Elise Bertoni, Andrea Halloran, D. Greg Tobey, Tamas Frank, Stephanie Day and Maggie Cocco.  PRM was named by writer, filmmaker, sculptor, photographer and musician Tamas Frank.  PRM is dedicated in loving memory to our treasured mutual friend,  G. Scott Seymour II, music lover, world traveler, teacher, and unforgettable soul.  In his loving and revolutionary spirit, Patient Records Music of Detroit believes in standing up to the madness of America’s current xenophobic and warmongering regime in calling one and all to: “Sound Your Voice!” Ryan Masell is our chief sound engineer.

In May 2001, a group of Loyola University students founded INPATIENT Magazine, a print quarterly of literature and political satire.  The Editor in Chief was E. Bertoni, the Art Director J. Witkowski and the Senior Writer, Krystian Domaradzki (K.P. Dawes).

In 2003, Witkowski and an ensemble of artists (T. Frank, J. Brown, A. McGurk,  R. McGurk and others) founded INPATIENT Artworks, an artists’ collective (film, photography, fashion and other media), now Iatrogenic Productions (Chicago) and Under the Root Fashion (Seattle).  E. Bertoni, who had returned to her Michigan home, continued to act in films and model for the group’s projects.  In 2010, Bertoni founded the global travel web blog Outpatient Press out of Rochester, Michigan.  In “Calling all citizens of the world!” Outpatient seeks new and varied artists for reviews and original writing by artists without borders.

Bertoni composed, recorded and performed original music under assumed names for many years, most frequently with Tamas Frank at his Chicago-based Frequency Clinic Studio.   Travels to Nashville in 2011 and 2014 resulted in five of her original songs recorded with Omni Sounds.  In a recent third journey to that studio from the Motor City to Music City with musicians Andrea Halloran and Maggie Cocco, the three women produced the label’s first single, “Fool Me Once” (Cocco), slated for for release August 24, 2017.  Stay tuned for updates and thanks for visiting!

Thank you to everyone who made our singles release debut such a success.  For full details, visit scienceforsociopaths.com.

A special thank you to Joseph David Witkowski for our new logo.

The site theme song is a cover of Tori Amos’s 1992 hit “Tear In Your Hand” sung by Kristen Halloran, mixed by Ryan Masell.

Pardon our dust! We are between dimensions right now, working to bring you the best in new Detroit music.  Meantime, our A.I. minions can be reached at: patientrecordsmusic@gmail.com, or @PatientRecordsD

WE LOVE YOU, SOUL BROTHER.